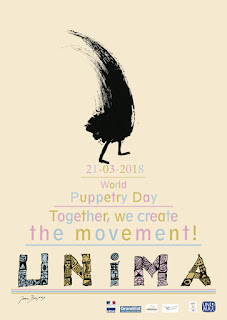 A sculptured head
A painted figure
Is it human
Is it animal
Or even vegetable,
Made of roots or dead leaves
Is it mineral
Shaped straight from the mass of stone
Or from clay heavy with metals
Or is it just foam or rags…

It is or it represents a loved one
An Ancestor or a Guardian Spirit
But it could be a votive statue
A mask or a doll
What makes it a puppet
Is animation:
We wear a mask or carry a doll
We shake a jumping jack
We animate a puppet…

It can be a cane
An umbrella, a hand or a foot
As long as we can animate it
Give the illusion that it has its own life
A personality, a character,
A plan, a goal, its own destiny
A life it leads like all other beings
A life linked to its animator, its Creator:
A dialectical life, sometimes poignant,
More often comic and fantastic…

We cannot wonder about puppets
Without wondering about creation in general
And the creation of Life in particular
Especially, about the creation of living beings
Apparently independent
But whose dependence or interdependence
Often goes beyond mere Animation
To become pure Manipulation...

We cannot wonder about the Creator
And the kind of mockery
That drives these nagging questions
Without imposing upon us another mockery:
That of the eyes of the child in each of us
And in each member of our audience,
This is what helps us escape
Despair and impotence
When faced with the continual rise
Of intolerance and violence.

We need this child’s eye view
To believe in these animated figures
These “Ndjundju” or these “Kakamu”
These “Sogos Ba and their Sogos Denw”
Sometimes so fine and attractive
Often so strange and frightening
Which terrorize and amaze
In turn, no matter
But which captivate completely
All our attention and willingness
To believe in magic and all its possibilities
Of the Change of the world and all its mores

And we accept the puppets,
We listen to them silently
We admire their faces and their mouths
Such marvellous imitations and representations
Of our societal Guignols:
Politicians, religious folk,
Men and Women
Voices of Power or Business
All so Mafiosi
So terribly perverse
We are moved to tears to see the puppets revealing everything
Without censorship or bombing

Here too, home, in Africa,
They are, they make the “Jesters”
They have a power of their own
A being power, a power to be
They are a gift, an inheritance
They are knowledge
From generation to generation
They are initiation
Before being playful
They are arts of epic times
Where speech becomes too closely watched
From now on requiring shields
To protect “the widows and the orphans”
These impulses of inventors and creators…

And, in this 2018 world celebration of puppetry art
I am especially proud and happy to have been chosen
To bring the Message of the Union Internationale de la Marionnette
In tribute to this art form that has not yet done
Revealing all the wealth of the human heritage
To the best consciousness of all humanity.
And I pray to all who have entrusted me with this noble mission
To, here, receive all my gratitude and respect.

Werewere-Liking Gnepo was born Eddy-Njock on May 1st 1950 in Bondé in Cameroon. She has lived in the Ivory Coast since 1978. This multidisciplinary Ivorian-Cameroonian artist is the author of around thirty published books, from novels to theatre, stories, essays, art books and poetry. She has been a painter since 1968 with many exhibitions all around the world. She is also a dramaturg, innovative puppeteer and director of numerous total theatre spectacles considered as African operas; several of these have made world tours; she is also an actress of the stage and screen, and a rap singer...

She was a researcher in traditional pedagogy at Abidjan University (LENA) between 1979 and 1985; she participated in the 'revolution' within ritual theatre and was the founder of the arts group Ki-Yi Mbock. She has developed a training system inspired by African initiation rites; within this training, she acts as a 'star awakener'. This role has enabled her to support hundreds of young people in troubled circumstances to become successfully reintegrated within society as leaders; this led to her being awarded a 'City Heroes' prize from Prince Claus of the Netherlands in 2000. She set up the Ki-Yi Pan-African Foundation for Youth Training in Cultural Creation and Development in 2001 and continues this work today. She has received several prizes, such as the French Arletty Award, the Belgian René Praïle award and the Fonlon Nichols award from the University of Alberta; she is a 'Knight of Arts and Letters' in France, a Commander of the Order of Merit for the Ivory Coast, was a member of the High Council of French-speaking communities between 1997 and 2003. She received the Noma Award in 2005 and was winner of the book of the year in 2007 for, amongst others, her novel Amputed Memory. She is currently a permanent member of the Academies of Science and of African and Diasporic African Arts and Culture in the Ivory Coast.